One of my friends has a rhubarb plant that she wants to rip out. Her husband planted it quite some time ago, but they almost never use it. It’s taking up about half of one of their raised beds, and she’s worried that her two year old son will, one day, take to chomping on the leaves. So, with this in mind, I convinced her to let me decimate her rhubarb plant so that I can make rhubarb jam as part of my Christmas presents this year. Given that I’m trying to purchase as little as possible for these food hampers, I was delighted to find a free source of “fruit” for my jam!

I had a look around at a few places for recipes for rhubarb jam, convinced that somewhere I had read about a ‘spiced rhubarb jam’. But, since I couldn’t find it anywhere, I decided to wing it!

I chopped up 600g of rhubarb into roughly 1cm pieces and then combined it with 1 and 3/4 cups of sugar in a bowl. 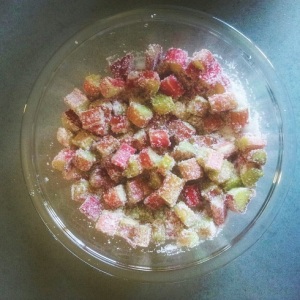 Once the jars were washed, I popped them in the oven at 150 degrees C, and put their lids into a saucepan to simmer while I put the rhubarb and sugar combination into a large, flat saucepan.  I also popped in two sticks of cinnamon (these have been sitting around for a while, so I’ve no idea if they’re still good or not, but I thought it wouldn’t do any harm). I also put a plate in the freezer so that I could test whether the jam had “jelled” later on. 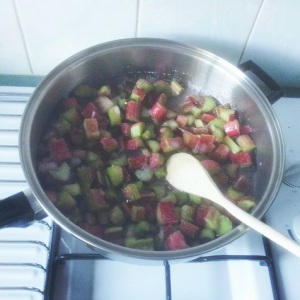 After a few minutes the rhubarb began to release a lot of water and I kept it at a rolling boil. (For anyone that doesn’t know, a rolling boil is where the contents of the saucepan continue to boil even while you are stirring it). I made sure I stirred it fairly regularly so as to make sure it didn’t burn. At this stage I also added a teaspoon of vanilla essence. 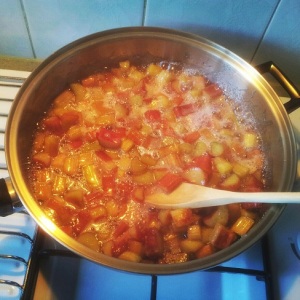 It took about another 10 minutes for the water to reduce off and it began to look like the jam was going to “jell”. I tested it by lifting a spoonful up and when it didn’t all run down easily (it tended to clump and stick to the spoon and drop as a glob) I placed a little bit on a cold plate, and when it held its shape it meant that it was done!

I used a ladle and my jam funnel to fill a couple of jars (I didn’t get much jam from this recipe, about 500g) and then left them to rest. For some reason I’m having trouble with the baby jars resealing (as I’ve mentioned) so of the three jars I filled, only one of them “pinged”. Luckily one of them is going to my friend (as payment for the rhubarb) so the two unsealed ones should be gobbled up soon! 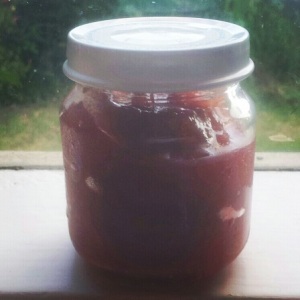 Have you ever winged it with a jam recipe? Or have a favourite rhubarb jam recipe?

1. Chop washed rhubarb into roughly 1cm segments.
2. Mix with sugar and leave to sit for about 1 hour.
3. Place sugar and rhubarb mix in a large, shallow saucepan with 2 cinnamon sticks.
4. Bring mixture to a boil.
5. Once mixture is at a rolling boil and water has started to reduce, add 1 tsp of vanilla essence.
6. After 10-15 minutes mixture should have reduced and the jam begun to jell.
7. Funnel into jars.
8. Enjoy!