In keeping with my attempts to make my Christmas hampers this year for as little as possible I recently put a call out on facebook to see if any of my friends had fruit going to waste that they wanted to donate to my jam making quest.

One of my friends replied and said she had a bunch of crabapples on her tree and so (after a quick google to make sure I could find a recipe) I agreed to take them off her hands! I got the crabapples on Thursday night, but it hasn’t been until today that I’ve managed to find time to do anything with them.

The recipe that I found was posted on Babble by JulieVR and was super easy!

The first thing you need to do is wash and remove the stems of your crabapples.

Then you just roughly chop them up leaving the peels on and seeds in.

You then add enough water to just cover the crabapples and bring it to the boil. 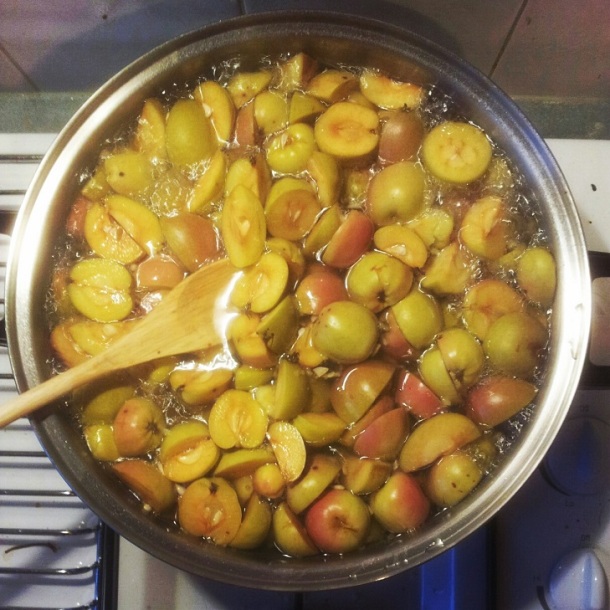 Once the crabapples are boiling, you reduce the heat so that it simmers for around 20-25 minutes. After this the apples should be soft and smushy. Remove the apples from the heat, give them a quick mash (with a potato masher or similar) and then continue cooking them for a few more minutes.

You then need to strain the crabapples. My sister very considerately bought me a jelly straining kit for Christmas (and then gave it to me early so I could use it – wonderful sister), but you can also use cheesecloth or muslin over a bowl. Make sure it’s secured tightly, though, or you may find that your cloth ends up collapsing into your liquid!

This bit probably takes the longest. The more naturally you let the liquid strain, the clearer your end product is going to be. As such, I periodically filled the straining bag and just let it drip through on its own and it took me about an hour from start to finish. If you don’t mind a cloudier jelly, then you can squeeze/prod/stir the crabapple through the cloth.

I didn’t weigh the crabapples before I started, but I did end up with about 6 cups of liquid. I strained my crabapples straight into my (brand new and awesome) pyrex measuring jug, which made this bit easier.

The rule then is that for every cup of liquid you have, you add 3/4 of a cup of sugar. So for my six cups of crabapple juice I had 4.5 cups of sugar.

This needs to be brought to the boil and then boiled for around 20-25 minutes. I didn’t have enough crabapples to do a trial run for this one (and I’ve never made a jelly rather than a jam before – the setting point is harder to see in a jelly) so I was hovering over mine, candy thermometer in hand. Mine took pretty much 25 minutes to reach 105c (220F), but it still was failing the cold plate test. I left it for a few minutes more while I prepared the jars and then just poured it into the jars anyway. If it turns out to be too runny, I’ll just label it as a syrup.

As an added note, I was sure that I was going to end up with cloudy jelly after looking at the liquid I started with, but it’s definitely a clear, pale orange colour. 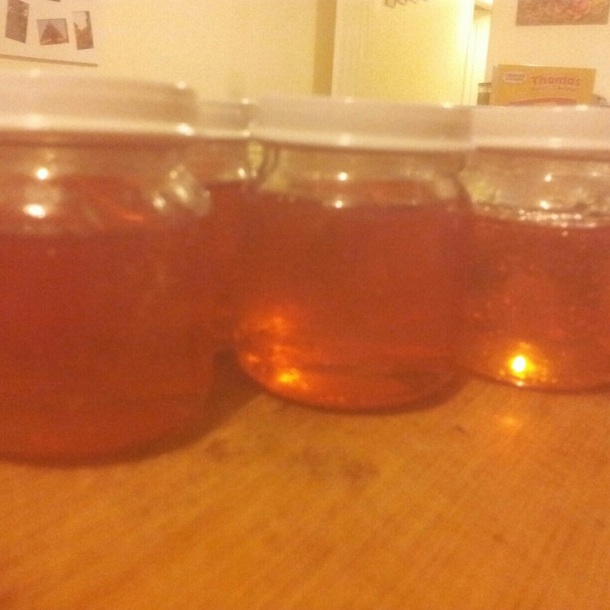 The photographs are coming out quite orange due to the lighting, so I might try taking another one tomorrow in natural lighting to update this with.

Have you ever made crabapple jelly? Have you got a favourite recipe?