Technically this post should probably be called DIY Burnt Apricot Jam, because I’m pretty sure that’s what I did. But since I want to focus on the positives, we’ll pretend like it didn’t happen.

About two days ago Nick announced that we should head to Canberra this week. We were going to head up at some point before the end of March because the National Library has an exhibition on mapping our world and Nick is a map fiend, but I didn’t realise it would be this week!

This involved us leaving on the afternoon of New Year’s Day, and with me frantically trying to save some of the apricots that I’d picked but not dealt with yet.

Apricot jam and I have a somewhat turbulent relationship. The jam should be fairly easy to make (consisting of a fairly straightforward recipe of equal parts chopped up apricot and sugar). But for some reason I’ve always had trouble with it. I’ve attempted to make it about five times so far, and I’ve yet to have the batch turn out perfectly. Some years it’s too runny. This year, burnt (and possibly too set). I’m not sure whether it will affect the taste (the small bit that I tasted while checking for the set seemed ok) but I have a sneaking suspicion it’ll turn out I’ve just made four jars of apricot paste.

This time a combination of a shortage of sugar and a not large enough pan meant that I could only combine 1kg of sugar with 1kg of apricots. If I’d had a larger pot I would have tried to make more in order to use up more of my apricots. 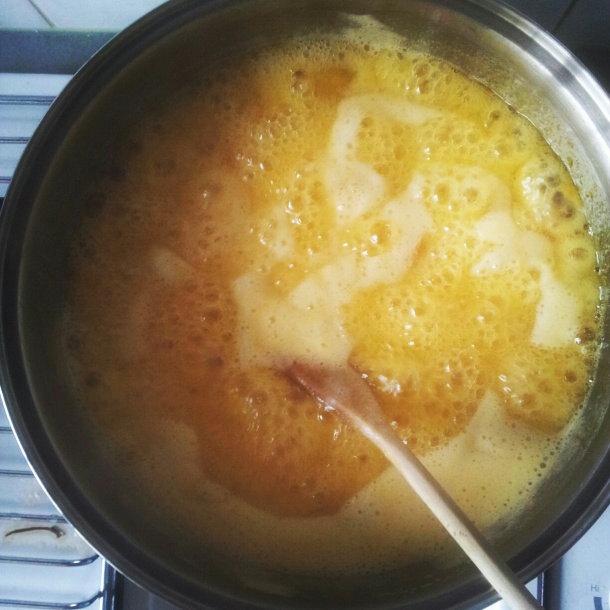 Here’s where it gets tricky. My recipe says that if you don’t add pectin (and I don’t like to) it should only take about 10 minutes for the jam to achieve a loose set (ie, runny). I find that if I stop the boil at this point the jam ends up basically like syrup, so I keep it boiling for longer. This year I was apparently too frazzled trying to chop up and store other apricots so while I didn’t leave it on for much longer than normal (about 20-25 minutes) I wasn’t stirring it as frequently and I think the temperature was higher, too. End result, after about 20 minutes I thought the jam smelt a bit burnt but it was too late to do anything about it.

You can see here the burnt jam against the lighter jam that I made for Christmas presents. These ones weren’t quite set enough and I had grand plans of reboiling it to increase the ‘jel’; though Nick had some on toast the other day and said it wasn’t too runny to use so now I’m not sure what I’m going to do!

I think the lesson to be learnt here is: don’t suddenly attempt to make a recipe that you find difficult while under massive time constraints.

Do you make jam? Are there any recipes you find tricky?